Sunday Scribbles Week 39: Be careful where you make your hideout #sunscribbles

The prompt for Sunday 1st October is ‘Villain.’:

This weeks attempt is based on the #Turtlewriters image prompt. The image made me think of pirates going to a hideout, and so my villains became pirates! 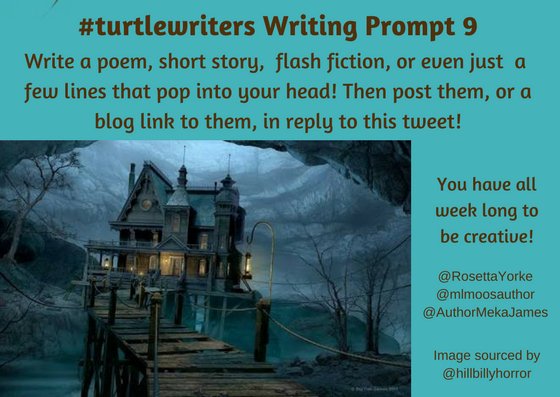 ‘We’ve been sailing for days,’ first mate Reginald said with arms crossed, as he stared across the endless ocean. ‘And for what? Cos Elaine thinks she’s clever?’

‘She’s not clever, and she’ll never make a villainous pirate,’ Captain Roderick replied, ‘But I’m desperate. An’ I don’t see any of you lot suggesting a new place for a hideout.’

A young woman with fiery red hair glanced up from where she scrubbed the deck and glared at them. ‘I was an educated lady before I signed on with you lot.’

Reginald smirked. ‘Yeah, and a lot of good it did you. Your father still didn’t think you could govern his island without a husband.’

‘Like he knows anything,’ Elaine replied. She pouted and glared at the deck. ‘If I can’t be governor, I’ll be a pirate and plunder everything he has. That’ll show him.’

‘Good luck doing that as a cabin girl, wench,’ one of her crew mates taunted. He shoved Elaine from behind and she lost her balance. Sopping wet, she pulled her head from the bucket of water and threw her sponge at him. Hard.

‘Whose idea was it to bring a woman on board anyway?’ Reginald complained as the sponge hit the crew member square in the head. The crew member lost his balance, tripped on a cannon, and toppled overboard. ‘Nothing but bad luck.’

‘She has her uses,’ Captain Roderick replied with a wink. He trailed his hand over Elaine’s neck as he passed.

A cry came from the crows nest above them. ‘Land hoy!’

Elaine flew to her feet. Swift hands grabbed the weathered netting near the mast, and she hoisted herself up the rigging towards the crows nest. The startled crew member blushed and dropped his spyglass as she squeezed in beside him. Elaine plucked it out of the air and turned it towards the island.

‘That’s it! The island from my fathers map!’ Elaine cried. She pointed with excitement ahead of her to a small dot in the distance.

Below her, the captain stalked to the helm and pulled out his own spyglass. ‘There’s nowhere to hide our ship.’

‘Trust me, there is,’ Elaine replied with a grin. She grabbed a rope and swung from the mast to land on sure feet by his side. ‘Just guide us between the rocks, and you’ll see.’

Guiding a large ship between even larger rocks was not a simple task. Elaine winced as the wooden hull scraped against them as they passed, and she grasped the rigging in a death grip as the ship tilted far left.

‘This better be worth it,’ the captain said from the helm, as another crew member went overboard.

Elaine bit her bottom lip as she watched a cave emerge ahead of them. ‘I hope so.’

‘If this isn’t worth it, the repairs are coming out of your cut,’ the captain said, as he guided the ship through the narrowed passage. He let out a gasp as a hole in the ceiling of the cave illuminated an eerie damp wooden shack, complete with rope bridge and a small inlet to dock their ship. A few skeletons littered the shore, and an overturned ship, smaller than theirs and beached and broken, lay beside them.

‘You think this’ll do boss?’ Elaine asked with a smirk as she took in the captain’s slack jaw. The rest of the crew were much the same. A mixture of shock and disbelief.

The captain blinked and nodded as he turned to her. ‘Do? It’s the perfect secret hideout! The cave, the rickety bridge, the skeletons. I think I’m in love!’

Elaine grinned. ‘Just to be clear… With me, or with the place?’

‘The place, you idiot,’ the captain replied, but his smile was fond. ‘Good work woman.’

As they disembarked and unloaded, Elaine was clapped on the back and complimented more than she had ever been, even as a lady of leisure. During the next few days, her discovery, and her continued knowledge of the best places to loot nearby, earned her the position of first mate of one of the fiercest pirates on the seven seas.

Everyone ignored the glares ex first mate Reginald shot Elaine. They were better off than ever for her help. Boxes of plundered supplies littered the ground outside the house. Kegs of rum surrounded the new tavern they planned to build. They even rebuilt the overturned ship. It was smaller, lighter, and needed a much smaller crew.

Now, they celebrated in the largest ground floor room of the house. Chairs were overturned. Pirates belted out tuneless melodies. Captain Roderick, rum in hand, engrossed his crew with tales of swashbuckling. Elaine’s hand rested on the hilt of her cutlass as she paused by the door to listen with a wry smile.

‘Then I run him through, an’ saved the damsel in distress,’ Roderick boasted. ‘An’ glad I did too, cos she brought us all this!’

Elaine sighed as Roderick gestured around him. They’d never believe her if she said Roderick had been the one in distress, cowering in a corner whilst she fought off the man who kidnapped him. She shook her head and slipped out the door.

Shadows concealed Elaine as she moved, crouched, around the edge of the house. She pulled her hair into an untidy bun and tucked her dark green cloak around her. Swift steps took her in the direction of the rope bridge. Voices cut through the air, and Elaine ducked behind a stack of boxes near the house to listen.

‘I still don’t see why he replaced me with her.’

Elaine peered into the darkness. Two figures stood by the rope bridge. Reginald was complaining again.

‘Cos she found the hideout. Knows the seas. Has them maps an can read ’em too,’ the crew member from the crows nest replied. ‘Kinda obvious if you ask me.’

‘Women ain’t got no place on a pirate ship,’ Reginald said. ‘She can’t even fight.’

‘Can’t fight…’ Elaine muttered. Her fists clenched beside her as she watched the water slap high on the side of the hill. She was running out of time. She was going to have to fight her way past them. They’d soon see who couldn’t fight. Before she knew what she was doing, her cutlass was in her hand and around Reginald’s neck. ‘Move, and you’re dead.’

‘Elaine?’ Reginald tried to turn his head, but Elaine pressed the cutlass harder, and he froze as blood trickled down his neck. ‘Come on, be reasonable.’

Water lapped at the edge of the bridge. Elaine smirked. ‘Tide’s rising, boys. Better get out while you can.’

Reginald huffed with relief as Elaine released him and tossed him to the floor.

Reginald stood and brushed himself off. His hands came away wet, and he grimaced as the grass beneath his feet squelched with water.

‘Secure the boats,’ Reginald said to Elaine and the crew member. ‘I’ll alert the captain.’

Reginald sloshed through the soggy grass towards the house and pushed open the door. As soon as it slammed shut, Elaine raised her cutlass to the crew member.

Elaine stepped towards the bridge. Her boots would fill with water if she didn’t hurry. ‘Stay here,’ she ordered the crew member, and she turned and ran across the bridge.

There was a splash behind her as the crew member joined her on the other side. ‘I’m coming with you.’

Elaine glared at him.

Elaine gave him a once over. Scruffy, not particularly strong, but a good lookout. ‘Fine, but I’m captain, and I choose the crew.’

‘No arguments from me,’ the crew member replied as he followed Elaine onto the ship. ‘With your skills we’ll make a fortune,’

Elaine reached the helm and turned to fix him with a sharp look.

‘You’ll make a fortune,’ he corrected as nervous eyes darted around. ‘Where do you want me?’

‘Bring her over here!’ Captain Roderick yelled across the cave, water up to his calves as he tried to wade through the water towards the bridge.

‘Not a chance!’ Elaine yelled back. She spun the wheel and turned to the crew member, who stood idle by her side. ‘What are you waiting for? Sails. Now!’

He scuppered away to unfurl the sails. Elaine grinned as they caught the wind, and she directed the ship towards the mouth of the cave.

‘Elaine? Sweet pea? Come back!’ Captain Roderick yelled from where he clung to the bridge.

Elaine glanced over her shoulder as the water continued to rise. It lifted Captain Roderick’s larger ship with it, and the mast groaned as it hit the roof of the cave.

‘I won’t save you this time!’ Elaine yelled, as the mast of Roderick’s ship creaked and snapped in two. ‘Who’s the villain now, captain?’

A wave swept over Roderick and smothered his response. Elaine watched as Reginald dragged his spluttering captain back inside the house, before she turned her attention back to their escape. She bit her lip and guided the ship around the rocks towards the mouth of the cave.

‘So, how does it feel to be the first female pirate captain?’ the crew member asked when they were through the worst of the minefield.

‘I’ll need a crew before I can be called a real captain,’ Elaine replied with a hand to her chin. ‘Sailing will be tricky with just us.’

‘You’re not worried the other pirates won’t take you seriously?’

‘You worry too much. When they hear what I did to Roderick, no one will dare cross me,’ Elaine replied with a smirk, as they sailed through the mouth of the cave and off into the ocean. If only her father could see her now.

I love pirates, probably because I spent my childhood playing the ‘Monkey Island,’ video games. (Well worth playing if you love point and click adventure games.) The female governor, Elaine, is one of my favourite female characters, so my character in this prompt is named after her!

The prompt for 8th October is ‘Forget.’

If you try next weeks prompt yourself, let me know how it goes. Post your attempt on your blog on the 8th October, and leave a link in the comments below this post so that I can read it 🙂

If you can attempt the prompt in less than 140 characters, you can also #sunscribbles on Twitter. I am super interested to see what you all come up with 🙂

Louise loves dragons. This writing thing? She's been doing it for as long as she can remember. Her works in progress are Second Chance, based on Arthurian legend, a love of history and the BBC TV show Merlin, and Dragonspire, an adventure of loss and finding yourself in a medieval magical fantasy kingdom. Stick around for weekly writing prompts (she hosts #sunscribbles on Twitter), gushing over TV (HTTYD, Punisher, Gotham, Merlin, Sherlock and Fullmetal Alchemist) and medieval history, with occasional posts on games, photography, cooking, fanfiction and reading. By all means feed the dragons, but beware the magic. It’s out of control!